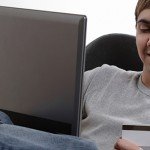 Advertisement
Parenting » Dilemmas » My son used my credit card without my permission!

My son used my credit card without my permission!

A sad and disappointed mother grapples with her 14-year-old son's decision to steal her credit card.

I am so sad and disappointed. Yesterday I noticed charges on my checking account that I did not recognize. When I finally tracked it down, it turns out my son took my credit card and set up a PayPal account and used it to buy some software for his computer. I honestly don’t know how to deal with this situation. So far, I have told him how hurt and betrayed I feel, how disappointed I am and I have taken away his computer.

When I asked him what he was thinking—I mean, he knows I would find out and be mad and he would lose his computer — he said that he didn’t think about it. He just wanted the program and didn’t think I would let him buy it so he just did it.

He is 14 and consistently has made poor decisions over the past couple of years. He has what I think you would refer to as a slow frontal lobe development and so is unable to think through a decision to understand consequences. He is also very unorganized and undependable. My concern is that some day he is going to make an irreversible decision with drugs or alcohol that will be devastating.

Not sure what to do from here…

I can certainly understand why you’re feeling this way. For a moment let’s put aside your son’s recent pattern of “consistently” making “poor” decisions.

Let’s deal with the direct consequences of his charging stuff to you. Aside from telling him how hurt, disappointed and betrayed you feel (which is good for him to hear) and aside from taking away his computer (which is an appropriate partial disciplinary measure) … in what ways is your son paying you back for what he did? In what ways is he being held accountable for understanding that his “thoughtless” choice resulted in this outcome?

Because frankly his response “I didn’t think about it. I just wanted the program.” while certainly an understandable cursory teen response to your question “What were you thinking when you decided this would be a good idea?” it is not an end point in this discussion.

Certainly, you are entitled to more introspection on his part. And more to the point, as his mentor and life coach, you are responsible for training him about the importance of being able (at any pre-decision moment) to stop, calm down, identify his goal (“I want the program.”), and think about his options for getting it and (this is the most important part) the possible outcomes of choosing any of those options.

Why bother with all this? Because being reflective vs. reactive (“I didn’t think about it I just did it ’cause I wanted the program.”) is the hallmark of a mature, responsible adult. You can’t expect a 14-year-old to nail it every time. But I’m telling you, if you don’t use this as a teachable moment to a greater degree than it sounds like you’ve already done, then you and your son are missing an opportunity to learn something very important.

Get Annie’s answers to other quandaries:

Should I let my teen daughter wear a thong?

I hate my son’s music!

How do you motivate an unmotivated learner?

My son used my credit card without my permission

What should I do about my daughter?

My daughter doesn’t fit in and gets excluded