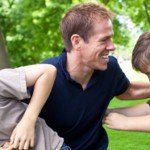 Advertisement
Parenting » Emotional smarts » Is it roughhousing — or fighting?

Is it roughhousing — or fighting?

While angry fighting isn't productive, research shows rough-and-tumble play where everyone is happy is good for kids, boosting academic, emotional, and physical smarts.

Growing up, when my siblings and I played, things got physical. From wrestling matches to stuffed animal wars, we were constantly challenging each other. My dad often jumped in on the fun, wrestling us to the ground and tickling us. As long as we kept our play “down to a dull roar” — and no one got hurt — my mom never enforced a ceasefire. She was intuitively letting us learn through play. Now, science backs this type of learning.

“Roughhousing actually makes kids smarter,” says Dr. Anthony T. DeBenedet, author of The Art of Roughhousing: Good Old-Fashioned Horseplay and Why Every Kid Needs It. From a scientific standpoint, random physical play that engages all your limbs kick-starts positive changes in the brain. When you roughhouse with your child, it triggers the release of brain-derive neurotrophic factor or BDNF, which plays a role in cognitive and emotional function, and oxytocin, which makes children feel loved. This dynamic molecule-and-hormone duo fosters new neural connections, “like fertilizer for the brain,” DeBenedet says.

The random, helter-skelter nature of roughhousing activates multiple areas of the brain and promotes healthy brain development — upping a child’s academic and emotional smarts. Flying through the air and rolling around? Hello, cerebellum (an area that contributes to your child’s motor skill development). Strategizing your next move or judging your partner’s agility? Jump on in, cortex (the zone that handles language, math, memory, attention, and complex problem solving). And that happy, connected feeling after so much romping and rollicking is the amygdala (a group of nuclei where memory and emotional reactions are processed) stirring. (Read more about brain development in your preschooler, kindergartner, first grader, second grader, third grader, fourth grader, fifth grader, tween, or teen).

Perhaps the most important connection between roughhousing and intelligence is that those friendly “fights” help kids become behaviorally flexible. Since no one can memorize the right answer to every question, coping with whatever comes your way and managing the unpredictable is a valuable life skill — and an essential ingredient of intelligence. It involves creativity and the ability to look at problems from different angles on the spot, without prompts or prods.

Who should roughhouse? The Art of Roughhousing‘s author DeBenedet advocates for parent-child roughhousing. The majority of studies show children ages two to eight are the most likely to benefit, but there are emotional benefits to roughhousing right through adolescence and the teen years, he says. As the parent, keep in mind that every playtime has an arc. You may be interrupted by a phone call or a kitchen timer, but try to respect the arc whenever possible: revving up at the start, playing energetically, and then winding down at the end. It helps fine-tune your child’s internal emotional barometer (read more about fostering EQ in your younger child, grade schooler, and tween or teen), which means honing skills such as reading body language, practicing eye contact, and picking up on nonverbal cues. It’s hard to believe that such difficult concepts to teach can be so easily incorporated into a simple pillow fight. And so much more fun than yet another lecture!

DeBenedet encourages roughhousing between parent and child — as long as the parent remembers to be the supervising adult, not a dominant, power-hungry bully. But it stands to reason that once roughhousing is introduced into your household, your kids will get in on the action by themselves.

Parents, advises DeBenedet, need to be ever-vigilant about making sure roughhousing between kids stays fun, and doesn’t turn into torment. Parents should listen carefully to make sure they’re hearing peals of laughter rather than cries of distress. To help this happen, the stronger/older/bigger sibling can have a self-handicap to make roughhousing a little more fun and fair, such as using only one arm or staying on his or her knees. Also, whenever possible roughhousing should be about physical fun, not winning and losing. For instance, he says, the kids can work on a goal, such as somersaulting to the other side of the room together.

A great way to help your kids keep things from going too far, whether they’re roughhousing with you or their siblings, is to have a safe word to trigger a time out that’s respected by all. While “stop” may do the trick, a word not naturally screamed in delight during tickling and out of the normal conversational context, such as “dragon,” “helicopter,” or “bingo” might work better. “In my house,” DeBenedet says, “we use banana cream pie.” The safe word can help both parent and child respect (and enforce) the arc of play: parents should step in and make sure there’s a time out when necessary and a cool-down period at the end, during which kids can talk about how they feel. (‘Was it fun? Scary? Too rough?’)

Most importantly, roughhousing is about having a good time and building bonds between family members. “Parents want to have a connection with their kids when they become adults,” DeBenedet says. By roughhousing, you are developing this connection, he says. Why? Because nothing communicates a bond better than positive physical contact — like a genuine hug or, in this case, a romp of a good time.”

With reporting by Lauren Shanley.