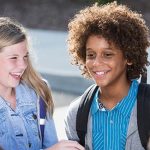 Inside the 7th grader’s brain

Wonder what's going on in that noggin of theirs? Check out the insights neuroscience has to offer about the mind of a seventh grader.

“When I’m a grown-up, I want to be totally awesome.”

Seventh graders are often hormone-addled, pimpled, unpredictable narcissists, rudely defiant one second and emotionally clingy the next. They’ve probably calculated that you’re not as cool as Taylor Swift, Stephen Curry or even their faddishly dressed BFF — and they let you know it. You may wonder if aliens inhabit your child’s body. Those invading “aliens” are hormones.

When kids reach puberty, their brains produce gonadotropin-releasing hormone (GnRH). When GnRH courses into the tiny pituitary gland, two additional hormones — luteinizing hormone (LH) and follicle-stimulating hormone (FSH) — escape and basically run wild. In boys, these hormones swim south, telling the testes to start manufacturing testosterone and sperm. In girls, LH and FSH manipulate the ovaries, soliciting the production of estrogen. In both cases, sometimes it can seem like hormones are running the show.

During this tumultuous stage of development, we need to provide seemingly unwanted (but still much-needed) love, advice and support — which is why it’s helpful to know what’s going on in their evolving noggins. Here’s how you can better understand the cranial crises happening in your seventh grader’s head.

A Dutch research study published in Cerebral Cortex proposes that adolescents indulge in risk-taking behavior because the anterior insula is more highly activated in young teens than in adults, and the ventral striatum peaks in middle adolescence. Both regions are hypersensitive to reward.

Underdeveloped frontal lobes also make youngsters behave more emotionally, because they’re still making decisions with their wild, fight-or-flight center, or amygdala, instead of with their reasonable, civilized (and still growing) prefrontal cortex. Warn your impulsive daredevil about the dangers of drugs, smoking, alcohol, unsafe sex, and out-of-control skateboarding without a helmet, emphasizing the catastrophic harm that can befall their most prized possession: their mind.

Adolescent gamers played one of two types of video games while researchers at Indiana University School of Medicine used MRIs to watch which brain regions were stimulated. When kids played “Need for Speed: Underground” — a non-violent game — activity was observed in the prefrontal area, a zone associated with concentration and self-control. But when kids played “Medal of Honor: Frontline” — a violent game — there was no prefrontal area activation; instead, the amygdala was excited. (That’s the “fight or flight” part of the brain.) The amygdala is affiliated with emotional arousal — especially anger — and is linked to aggressive, impulsive behaviors. Repeated firing up of the amygdala may train a seventh grader’s developing brain to have less self-control. So if you purchase video games, try to focus on games of racing or skill rather than violence.

More interconnectedness in seventh grade isn’t just a social phenomenon — it’s in their brain architecture, too. You’ll see it in your child’s improved ability to plan, problem solve and process complex thoughts and information. To multiply your seventh grader’s mental powers, encourage them to play chess. Research indicates that chess, the “Game of Kings,” initiates brain advancement in mathematical ability and multiple other cognitive tasks. Don’t like chess? Checkers and backgammon are strategic brain-builders, too.

When it comes to helping your seventh grader develop their mind, it’s worth challenging their muscles as well. Research indicates students with higher fitness levels get higher grades and perform better on tests.

To buff up your seventh grader’s brain and body, encourage them to be active, play sports, and exercise regularly. Parents can help by being healthy role models who work out regularly. Even better: try exercising with your child.

In contrast, Baumrind argues, when parents opt for the more controlling authoritarian parenting style, the tendency is to scold their kids more, which can instill a sense of inadequacy. Taken to the extreme, research shows that parental verbal abuse can cause significant reduction in neural white matter in three brain regions. Meanwhile, when parents opt for the more indulgent permissive parenting style, they tend to heap praise without justification, which can give kids a false sense of attainment.

No matter what parenting style you choose, the goal is to raise a mature and sensible kid and (hopefully) you’ll be a “totally awesome parent,” even if your seventh grader doesn’t come out and say it just yet. Just wait — someday they will.