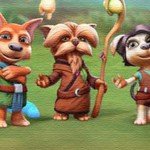 If video games could make us better

What if when your child begged for some time with their favorite video game, you could say “Yes!” and know they were learning empathy, perseverance, and how to calm themselves down when they’re about to explode?

Such is the premise and promise of a new app called If…, a narrative iPad game that allows kids to explore Ziggurat — a phantasmagoric world where cats and dogs struggle for power in a town that has fallen on hard times. But instead of (as with most popular video games) players stockpiling resources to achieve world domination or some such, If… players cleanse creatures of their dark energy by practicing things like teamwork, optimism, and good listening skills.

The brainchild of Trip Hawkins, founder of video game juggernaut Electronic Arts, the game was originally inspired by Hawkins’ own children. All four attended Nueva, a private school in Hillsborough, California that teaches (along with Silicon Valley core curriculum like tech innovation) something called social-emotional learning (SEL).

Putting the fun back in fundamentals

“He said, ‘This is my next vision,’” recalled Jessica Berlinsky, cofounder and Chief Learning Officer of If You Can. Berlinky met Hawkins while at GameDesk, a nonprofit dedicated to digital learning innovations, after many years working in the field of character education. The idea of a gaming guru like Hawkins creating an emotional learning tool (instead of an education expert creating a game) struck Berlinsky as a novel and potentially powerful improvement on many of the learning apps she’d seen in the past. After all, even the best curricula have little value if kids don’t like them. “That’s the irony,” she explains. “If [the kids] aren’t having fun, it just doesn’t matter.”

In the past few years, the world of learning apps has exploded as educators and tech experts realize the vast potential for digital learning to transform once-dry subjects into addictive, unabashed fun. Math games have seen the most promise — like Math Motion Zoom — especially in the lower years, where the math is relatively simple and the “gamification” happens around the learning. Successful social studies and science learning apps have often been more like interactive curriculum (BrainPop) or just beautifully displayed information (The Elements).

Social-emotional skill-building represents a newer foray into digital edutainment. The ideas behind SEL come from decades of in-school programs, positive psychology, and a field known as character education. The concept of explicitly teaching SEL has become popular among educators recently — especially in response to bullying concerns — but there has been less mainstream media (whether it’s games, television, or movies) that attempt to teach these concepts direct to kids. (There have been other pro-social games, but not many and few with such a richly imagined world for kids.)

Not just for kids!

The adventures in Ziggurat aim to change that. Designed for ages 7 to 11, If… harnesses all the aesthetic powers of the most popular video games — a richly animated fantasy world, layered music, sensual interactivity, character acting, and a series of increasingly difficult challenges — to engage the child.

The app has another ambition — perhaps a more ambitious one. Not only does it want to teach kids, but their parents, too. Though the just released first chapter does not have a parent portal, in a couple of months as new chapters roll out monthly they will add a parent app so moms and dads can look at their children’s behavior and get feedback on what they need to learn, with tips on how to help them. “A lot of parents are frustrated that they don’t have a window into their children’s experience when they play video games,” says Berlinsky. “The parent is out in the dark, they don’t know what’s happening to the child, what the child is learning — good or bad. We want to help involve parents in a way that’s easy, fun, and non-pedantic as a way to support the child.”

But a video game that teaches social-emotional learning? Don’t video games make kids antisocial? Wouldn’t an offline conversation with a parent be more effective at teaching SEL than even the most enlightened screen-time?

While it’s only fair to compare apples to apples — say, the value of If… against World of Warcraft — there’s also the irony that many parents may be tempted to outsource valuable face-to-face interaction with their children, as long as the digital media is sanctioned as educational. This, says Berlinsky, is one reason they are working so hard to help educate parents about the power of explicit social-emotional learning and their ability to help their children in simple but powerful ways every day.

On the other hand, the idea of learning social skills from media is not as weird (or novel) as one might think. Research has shown that reading literary fiction — stories with complex characters behaving in an invented world — increases empathy, so a character-based video game that encourages children to consider multiple characters’ motives and help resolve conflicts is but a new recipe whipped together from age-old ingredients.

Throughout the story, the child’s avatar is given dialogue choices that reflect different levels of emotional awareness and maturity. Some of the choices express a cavalier “whatever” attitude or unawareness about another character’s feelings: “He was out of control.” When my daughter — an independent minded 10-year-old who reads books beyond her years — began playing the game, I waited for her to choose the sometimes sassy but more callous answers. Instead she muttered under her breath, “I want to be a good person,” then proceeded to choose her best guess of what was the best answer. As the game continued, the difference between the more emotionally intelligent and less emotionally intelligent answers grew increasingly subtle and my daughter had to pause and think. She really seemed to like it — so much that my husband had to repeatedly yell that it was WAY past her bedtime.

After an hour of play, my daughter stopped abruptly, “Hey, there’s no math here.” I’d said it was a learning app, ergo no mindless math drills. What did she think it was about?

“It teaches you empathy and stuff,” she answered, as if this was the most normal thing in the world. Then she went back to her game and my husband started yelling again.