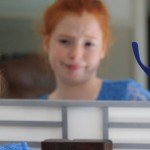 How often your child updates her profile, tags pictures, and talks on her cell matters — unless you’re raising the next Taylor Swift (in which case, carry on).

“When I’m famous, I’ll get more rich. And I’ll become a millionaire.”

“You have a lot of money, everybody likes you.”

A new realm — the public eye — is captivating tweens. And it may be creating a new “Look at me!” generation of kids who say they want to “be famous” when they grow up (rather than be, say, a ballet dancer or firefighter). According to brand new research out of UCLA, two social influencers — TV shows and social media broadcasting — may be at the root of this change. In focus groups (which elicited the comments above) leading up to her latest research, Yalda T. Uhls at UCLA’s Children’s Digital Media Center@la asked tweens about their values. The answers resounded with the same refrain: fame was not only a possible benefit of being good at something, but for many kids it’s a goal in and of itself. Such glorification of fame for fame’s sake jibed with Uhls’ own concerns as the mother of a 13-year-old girl.

Visions of Hollywood dance in their heads

The seeds of the research were planted with Hannah Montana, which Uhls’ daughter — along with the majority of kids her age — loved. At the time, Hannah Montana and American Idol were the two most popular TV shows among tweens, and both actively promoted the value of fame. In her research, Uhls discovered this fixation with fame is a new phenomenon. For four of the past five decades, the most popular TV shows promoted community — the values of belonging to a family and helping others. From 1967 to 1997 community was highly promoted and fame wasn’t (think Happy Days, The Cosby Show, Friends) — but by 2007 it had flipped: now fame is way up (think The Voice, Real Housewives of any city, Nashville, the Kardashian juggernaut) and community is in the red.

But TV is old media, and Uhls and her colleagues wondered if the proliferation of new media was triggering a greater focus on fame for kids. After all, today’s tweens have grown up with their pictures on Facebook, their funny acts on YouTube, and, at the very least, their every move recorded for posterity on the family laptop. In a series of focus groups with media-savvy fourth and sixth graders (80 percent own cell phones, 100 percent go online daily, 100 percent regularly watch TV and YouTube), a shocking 40 percent ranked fame first in a list of seven values, including community feeling, image, benevolence (aka kindness), fame, self-acceptance, financial success, and achievement.

But these focus groups were all in Los Angeles. Surely there was a Hollywood effect, right?

“It’s not like everybody’s saying they want to be famous,” says Uhls. “That’s the good news — at least so far.”

Although it didn’t top the list, 38 percent of kids surveyed put fame near the top of their list. These same kids frequently practice the same social media habits, namely posting photos, tagging photos, posting videos, updating their profile, updating their status, meeting new people online, and talking on their cell phones (nope, not texting). “It’s not random,” Uhls explains, noting that her findings don’t show one causes the other, but the correlation is significant. “It means there’s a relationship that’s so strong.”

“The kids who want to be famous are using these tools. Kids who say they value helping others don’t use these tools as much,” Uhls explains. She predicts that if she replicates this study in a few years, the fame-seeking group will grow.

Despite laws forbidding children under 13 access to the likes of Facebook and YouTube, Uhls found that many kids are using social media tools supposedly aimed at older kids and adults. Among 9- to 12-year-olds, she found 23 percent have a social networking profile such as Facebook, 26 percent have a YouTube account, 14 percent have posted videos of themselves online, and 7 percent have had videos of them posted online by others.

At the age when it is legal for kids to create accounts with these sites, the numbers go way up: 78 percent of 13- to 15-year-olds have social networking profiles, 46 percent have YouTube accounts, and 23 percent have posted videos of themselves online.

Alhough discussions of screen time and media management may make you yawn — and Uhls admits she hasn’t changed any rules for her own daughter — she advises parents to look at the messages they send about fame and about seeking a larger audience. “Parents might not realize it,” Uhls says, “but posting pictures and videos of their babies… is sending that message.” At some point, kids may not believe the attention of mom and dad in the living room is enough — and instead feel the constant need for the “Likes,” views, and comments of a wider audience online.

All those adorable pictures and videos don’t go away, either. Since this is the first generation to grow up online, we don’t yet know how kids’ online personas will follow them, and perhaps haunt them, into adulthood. Technology isn’t going away, so Uhls advises parents — and schools — to embrace it. Give your child guidelines, Uhls says, citing a dad who recently shared his thoughtful Instagram rule: pictures of trees and animals only, no pictures of people. “And ask schools to teach digital literacy,” she says.

What’s wrong with a little fame-seeking?

One of the biggest risks of fame-seeking social media habits is the propensity to seek new friends online — a red flag all parents should monitor. Uhls shared a story of a teenage girl who set off to meet a new online friend without her parents’ permission or knowledge. Luckily, she changed her mind mid-trip and the adult waiting to meet her was picked up by authorities instead.

But this is an extreme example. For most kids, Uhls says, the litmus test is whether the desire for fame is tied to skill or achievement — or if it’s just about the fame. If this is the case, it’s a good time to have a discussion with your kids about values.