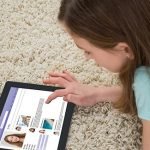 Social media isn't going anywhere, so as parents we to need consider how it affects kids' developing minds and determine what role we want it to play in our children's lives.

Is your child enthralled by social media? Many children are: a recent study by the Associated Press and NORC Center for Public Affairs Research determined that 76 percent of 13- to 17-year-olds use Instagram, 75 percent use Snapchat, 66 percent use Facebook, 47 percent use Twitter, and fewer than 30 percent use Tumblr, Twitch, or LinkedIn.

Why is social media so popular? According to Pew Research Center, the two primary reasons — for people of all ages — include a love of “sharing” (46 percent) and searching for “entertaining or funny” content (39 percent). Women also list “learning about ways to help others” (35 percent) and “receiving support from people in your network” (29 percent) as major excuses to log in.

These all sound like healthy reasons to use social media. But there are some risks to be aware of, particularly for tweens and teens.

Social media, like other technology examined in this series, has the potential to benefit or harm your child’s state of mind. It’s safe when used moderately with supervision, but it can be harmful if used obsessively with access to age-inappropriate content.

Here’s what parents should watch for.

Multiple studies have suggested that time spent on Facebook causes users to feel less happy and more anxious. A 2013 University of Michigan study found the more time participants spent on Facebook, the more their life satisfaction levels declined over time. On the surface, Facebook is an invaluable resource for fulfilling the basic human need for social connection. Rather than enhancing well-being, however, these findings suggest that Facebook may undermine it.

Some studies have found that spending time on Facebook leads young women to compare their bodies to those of their friends, and to have negative feelings about their own bodies. One study conducted by The Center for Eating Disorders at Sheppard Pratt in Baltimore found that more than thirty percent of users feel sad when comparing Facebook photos of themselves to those of their friends, and feel they need to change specific parts of their body when comparing their photos to others.

Any way you look at the numbers, online bullying is a problem for today’s teens. A 2018 Pew Research Center survey found that 59% of U.S. teens have experienced abusive online behavior, including name calling, rumor-spreading, and receiving unwanted explicit images and threats. Teens from lower-income families were more likely to experience certain types of online bullying. For example, nearly a quarter of teens with annual household incomes of less than $30,000 say they have received physical threats online, compared with 12% of teens from households with annual incomes of $75,000 or more. And those who report being online “almost constantly” are more likely to face online harassment: 67% of teens who say they are online all the time have been cyberbullied, compared with 53% of those who use the internet several times a day or less.

Virtual peer pressure can be powerful. A study published May 2014 in the Journal of Adolescent Health studied 1,563 tenth graders from five Southern California high schools to determine how much social media use affects adolescent risk behaviors like smoking, drinking, and experimenting with drugs. The researchers found that seeing risky behavior on social media had a direct impact on adolescents’ risk-taking behaviors.

Parenting in the age of technology

Unfortunately, there’s still a lot we don’t know about the long-term effects of technology on the developing brain. But since technology isn’t going anywhere, parents need to think carefully about the role it plays in our children’s lives. By limiting hours per day, monitoring content, and openly explaining how social media habits can negatively impact their mental health, you can be on your way to smart, and safe, digital parenting.

And remember that your kids are watching you. If you’re using your phone all day, your child will consider that normal — and do the same. Shut off all gizmos regularly and enjoy face-to-face conversation. Take your children outside, without digital toys, and enjoy the wind, sunshine, trees, and flowers. Growing brains need the kind of nourishment that technology — no matter how sophisticated and bewitching — can never supply.