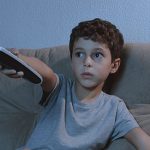 By the time kids enter middle school, they will have seen 8,000 murders and 100,000 more acts of violence on broadcast TV alone. And studies show it affects their behavior.

Played a T- or M-rated video game lately? Watched a cop show? Followed a gangsta rap feud, seen an action movie or checked in on one of the many celebrity smackdowns? Violent and aggressive behavior shows up everywhere. And it’s not simply passive; as video games take center stage, they allow players to maim, kill and create all kinds of havoc. In fact, that’s how games are won. Studies show that aggressive gaming affects kids – so much so that the American Academy of Pediatrics (AAP) concluded that “playing violent video games leads to adolescent violence like smoking leads to lung cancer.”

Why You Should Care:

Because the studies don’t lie. Lots of violence affects kids’ behavior. Period. When kids marinate in media steeped in acts of aggression, it can increase anti-social activity and bullying, and decrease empathy for victims of violence. The more aggressive behavior kids see, the more it becomes an acceptable way to settle conflicts. Movies with scary images, intense peril, loud noises and, above all, blood and gore, create all sorts of disturbances, including increased anxiety, sleep disruption and wicked nightmares. And those first-person-shooter video games? The intimacy of the mayhem and murder pack such a huge emotional punch that they alter brain chemistry.

Some Facts You Should Know