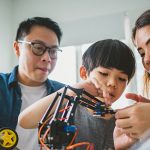 Advertisement
Parenting » Science » Whose science project is it, anyway?

Whose science project is it, anyway?

When teachers assign projects, parents are often unsure how much to help and end up doing way too much, particularly if the child seems overwhelmed.

Imagine that you’re 7 years old and you’ve just been asked by your teacher to make a diorama of a Native American village.

Over the weekend you dig up an empty shoe box in the garage. You ask your parents for ideas on how to make teepees and rocks and trees. You “borrow” your brother’s toy forest animals. By Sunday evening, you’ve assembled, glued and painted a humble and adorable replica of a Native American village.

The next morning you enter your classroom with your handiwork, only to be confronted by a 3-foot-by-4-foot rendition of the meeting of the Sioux nation at Little Bighorn, complete with a working waterfall and 50 intricate tiny teepees. Instantly, you know that this is the work of Jennifer. Or rather Jennifer’s mother, with Jennifer working as the assistant.

Your heart sinks as you ditch your diorama under your desk. You join an ever growing group of awestruck children gathering round Little Bighorn.

Sadly, similar dramas unfold with unfailing regularity in schools around the country. And, we may wonder, is it worse for the kid who didn’t make the fancy diorama or for the kid who did (and must live with the fact that everyone knows she didn’t actually make it)?

This is one of the trickier aspects of parenting: How far should a parent go to help their child with a project? At a time when many teachers are desperate to get parents involved in their children’s education, there are others contending with the opposite problem: parents who want so much for their children to succeed that they regard the child’s homework as their own.

“We want to see what the children can do themselves.” —Linda Eisinger, third grade teacher and Missouri’s Teacher of the Year, 2005

Linda Eisinger, a third-grade teacher in Jefferson City, Missouri, and Missouri’s Teacher of the Year in 2005, notes, “We do have guidelines for parents now, but you have to be careful how you word it. Basically we say it has to be the child’s original work. It can get kind of touchy if you don’t think it’s the child’s original work and they’re telling you it is. However, if you have the child in your classroom, you’re pretty aware of what they’re able to do on their own.”

“We’re a little bit loose with that when the children are 8 or 9 years old,” she adds. “We know that they have to have some guidance and we’re happy to have the parent involved. It’s just difficult for parents to know when to let the child take over.”

In Eisinger’s classroom the children are asked to make a milestone chart as one of their projects. “They have to do a timeline of their life,” she says, “and of course being only 9 years old they have to have a lot of their parents’ input, only because they’re not going to remember a lot of the milestones. I have some children that, even though the parents give them the information, are allowed to put it together in a format that you can tell is the child’s idea. But then some come in with work that is all computer printed and with clip art, and it’s obvious that the child had very little to do with it.”

To combat the tendency some parents have to get over-involved in a project, Eisinger has started having her students do their projects in the classroom.

Advice from a science fair winner

Ben Fohner, a student at Stanford University, won first place as a high school student in the botany category at the Intel International Science and Engineering Fair in San Jose, California. Fohner believes that his parents’ support was crucial to his success, but he did the work himself.

“I did the research at a plant pathology lab,” he explains, “a connection I had made while working on a previous science fair project.” [This connection was facilitated by his father.] “I worked there over a summer and ended up focusing a lot of my time on a project that was of interest to the company. The company grows geraniums in Guatemala and they had problems with a certain bacteria being transmitted from one plant to another, and they couldn’t really figure out how it was happening.

“So my project was basically to identify the water as the cause of the contamination, and then to show that the bacteria could survive in the water for a long period of time and could infect the other plants. I wrote it up over the year and entered it in the Santa Clara County science fair. I won and the grand prize was a trip to the Intel International Science Fair. I competed in that at the end of my junior year and ended up getting first place there.”

How his parents helped

Fohner’s description of his parents’ involvement is sound advice for any parent looking for ways to support their children.

“You want the student to come up with the science project idea. You want them to do all of the writing. You want them to come up with an idea for the display,” he says. “What parents can do that is really helpful is to make the connections with people that might be able to help, and to be there to bounce ideas off of. Being there to say when something makes no logical sense. Being a support structure. I think the support level is definitely the most vital.”

Roger Falcone, a professor of physics at U.C. Berkeley and a former school board member, is a judge with the Siemens-Westinghouse Competition in Math, Science, and Technology, which is a national high school program.

Falcone points out that kids can suffer when parents are either too involved or not involved enough.

“There could be a negative side of demoralization for school kids based on the perception that projects, be they science fair projects or art projects or even written work, are at an especially mature level and that obviously there was more parental participation than they might have had,” he says.

“On the other hand, the other extreme is where parents have no involvement in encouraging their kids to be on schedule, in doing some editing of written work. Or there’s no involvement in helping them if they have some art concept in their mind, in helping them to get art supplies and not asking them to make something out of scotch tape and chewing gum, but bringing them to an art supply store where they might be able to get some clay in different colors.”

“That kind of participation is a very positive thing. It encourages the kids and opens up an understanding and capabilities for them to express themselves more.”

While science fairs at the local level might not have safeguards in place to prevent over-involvement from parents, science competitions at the national and international level do, says Falcone. “There’s a period when the students and the projects are opened up to the public, so the students have to engage with the public. Students have to talk in front of their peers and explain what they did and explain why it’s important. It’s really hard to fake it there or to have parental involvement dominate in an oral presentation. Even at the elementary level, I think one of the fun things is when the students get to present their projects to their peers. That’s where the added value really comes in. How do you communicate the science that you did to your peers? That’s a real high energy situation.”

Recent studies conducted at the University of Illinois at Urbana-Champaign suggest that parents can best support their children’s learning by refraining from becoming too involved. The optimal approach is to encourage children to do their own work. As tempting as it may be to rush in and get the job taken care of, or as much fun as the science project may be when you’re an adult, or as desirable as it is to help a child to be a classroom star, the long term effect of such actions is to cause children to disengage from the learning process.

Helping  your child with a project