The Education Equality Index (EEI), created through a unique collaboration of GreatSchools and Education Cities, is a nationally comparative measure that looks at how well students from low-income families are achieving in schools, cities, and states across the country and

The EEI taps GreatSchools’ national school information database and includes data on the academic performance of low-income students as reported by state departments of education, spanning the years of 2011 to 2015. The EEI analyzed data from more than 55,000 schools nationwide.

The public website features the academic performance of students from low-income families in 213 of the 300 largest cities in America, according to school-age population, and which had available data.

The goal for the EEI is that a wide range of stakeholders — policymakers, advocacy groups, researchers, journalists, foundations, district and school leaders, and parents — will use the website and report as catalysts to more deeply understand the endemic equity gaps in our nation’s education system and to celebrate successes where progress is being made. 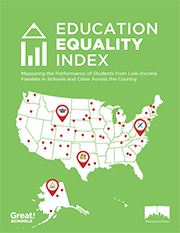