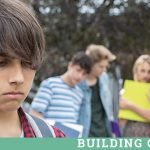 In the heat of the moment, it can be hard for your child to stay out of trouble. Give him these tools for dealing with peer pressure when it happens.

Even when they’re trying to do their best, it can be hard for kids to resist peer pressure – especially in the heat of the moment when a parent or other trusting adult isn’t there to protect or advise him. Also, kids often get into trouble when they act without thinking – so thinking and talking about peer pressure can help prepare your child when he does have to face a difficult moment with friends.

So try to have regular conversations about peer pressure with your child. Talk with him about what to do when friends want your child to do something he shouldn’t. Teach him to think through his actions before acting on them: Would he feel bad if he did something he knows he shouldn’t do? What would his other friends (the ones not in the pressuring peer group) think of him if they knew? What would his family – parents, grandparents, brothers and sisters – think of him? Is doing what he’s being pressure to do something that’s going to make him feel proud of himself and good about himself?

Here are five steps you can tell your child to take when he’s dealing with pressure from friends: