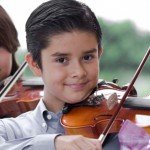 When her son started kindergarten at a public school in Berkeley, Calif., Marion Atherton just assumed that music would be part of his education.

As the director of the Crowden School, a Bay Area non-profit that offers music education to children who don’t have access to it, Atherton took it for granted that her own son’s school would teach music. She soon learned differently: her son wouldn’t be getting any music classes until third grade.

“I was sort of shocked,” said Atherton. “Here I am director of the Crowden Center, and my own children don’t have a music program?”

Her son’s school was not alone: A 2008 study by the Center on Education Policy found a narrowing of school curricula had resulted in a significant shift away from arts and music programs nationwide: since 2001-2002, 16 percent of elementary school districts have reduced their instructional time in arts and music. Music programs in schools continue to be largely dependent on fundraising, and thus on the socioeconomic status of their communities.

Such cuts to music education are particularly ironic given the growing body of research that underscores how music engages many of same areas of the brain involved in language processing, memory, and other critical thinking skills essential for academic success. Music also appears to benefit kids socially and emotionally.

Here are seven areas where studies have shown the benefits of music to kids’ education and development:

Bringing music back to schools

Marion Atherton efforts to integrate music into the early grades at her child’s school were ultimately successful. She applied and received a grant from the California Arts Council to bring in a music teacher for regular instruction. The schools’ teachers who would be adding music to their classrooms initially were wary. After all, already they had more lesson plans and requirements than they could cover in a given school day.

But, like Atherton, they came to see that music was not an “extra” activity, but one that was integral to education in general.

“The teachers were a little resistant at first,” Atherton recalls, “but over time they actually became hugely supportive of it. They saw how it gave certain kids a confidence or a joy they didn’t see in other ways. And it was a great way for a classroom to feel a sense of community — and that carried over into the other things their classroom did.”