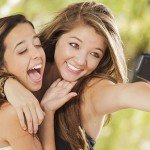 Advertisement
Parenting » Smart strategies » How can I tear my tween away from that screen?

How can I tear my tween away from that screen?

When your child's life revolves around screen time, how do you raise an emotionally intelligent, yet tech-savvy, kid?

354. That’s the number of photos my 15-year-old daughter and her best friend took while we spent the first weekend of the summer at the beach. When they were not snapping selfies and sunsets from their phones, they were analyzing, editing, and debating where and how they would share those photos with their followers back home. Post to Instagram? Shoot a video for Snapchat? Even “old school” Facebook played its part in broadcasting the endless fun they were having. As I watched these gorgeous teenage girls document their experience — nearly every moment of their day and night — I said nothing. Silently though, I worried that they cared more about showing off virtually than enjoying their very real vacation.

The digital revolution has transformed children’s lives. For those of us who didn’t grow up with a small handheld device glued to our bodies, this new normal looks anything but. As a child psychologist and author, I study, write, and do research about how media affects children. The good news is that so far, most research finds that kids are doing what they’ve always done: using peer relationships as a mirror for forming their identity. The only difference is that 21st century technology amplifies these normal developmental desires and needs. While friends have always been crucial during early adolescence, nowadays, thanks to the Internet and mobile communication, peer opinions are accessible to adolescents 24/7.

So instead of developing their identities through gossiping in school hallways and trying out for the school play, today’s kids refine their virtual selves by posting photos and videos online before an audience of often hundreds of peers, many of whom they’ve never met. When we grew up, we had to guess (or ignore) our social status based on the behavior of people we knew in the physical world (Why did she give me that look? Why didn’t he ask me to dance?), but now kids can quantifiably measure what behavior brings popularity through virtual likes, comments, and shares. For some teens, this capability underscores an almost obsessive focus on sharing every moment of their lives on social media.

After my daughter and her friend posted their photos, they waited for the likes to come in. My daughter even asked me to “like” her new Facebook profile photo, although I was forbidden to comment. When I asked why she cared so much, she looked at me patiently like I was an idiot. More likes means more popularity, she explained. The more things change, the more they stay the same.

Will these tools, which allow teens to spend inordinate time focused on themselves, change their generation? Already, they seem to be reshaping family dynamics and influencing the ways we communicate.

When Jerry Seinfeld said, “There’s no such thing as fun for the whole family,” he could have been talking about the ways new technology has changed family leisure time. Mobile technology and a plethora of content means that everyone can individually enjoy their own shows in the privacy of their own rooms. Today, each person in our household can now ask themselves “What, where, and when do I want to watch?” All too frequently, this means everyone is in a different room, watching or playing their own content on their own time. When I was growing up, one television, no DVR, and only a few network stations meant that the family had to gather together, in the same room, at the same time, and negotiate what we would watch together.

This shift toward personalized screen time could be affecting our children’s development in a number of ways. Not only are kids exposed to a narrower band of content, shaped for their tastes, but they also lose the benefit of a parent’s perspective on the narratives. It also means that families and friends are no longer in the same rooms, and some sense of community is undoubtedly lost.

In addition, because communication through screens is so simple, we probably spend less time looking at each other. Our early adopters — kids and teenagers — may be sacrificing essential social learning. For example, at a Fourth of July brunch I attend every year, adults and children happily mingle, enjoying one another’s company. But a few years ago, I noticed a stark contrast in each generation’s social behavior. As in the past, most of the adults were conversing face to face, but this time, the kids were sitting in a row on a couch, facing forward, staring at their phones. Even in the midst of a swirl of activity, five tween girls ignored one another to focus on their devices.

Humans learn about feelings through face-to-face communication, and research shows that understanding emotions inform empathy. Our facial expressions, our tone of voice, and our body language are just a few of the ways we communicate how we are feeling to other people. The understanding of emotions begins to develop when children are very young, and screens cannot teach the same understanding. The use of mobile technology by children under 8 years of age is rapidly growing, and products like a port-a-potty with a place for a tablet mean fewer places than ever offer screen-free sanctuaries.

So what’s the solution — live under a rock, cut out all media, or move to the North Pole? Not feasible for most of us living in the real world. Instead, parents would do well to make the most of the media in their children’s lives and proactively manage the tech beast with these three principles.

As a former Hollywood executive and producer, I’ve seen how quality media can actually teach emotional intelligence. By choosing great stories with subject matter worth discussing, and watching with your kids, you can help media support your child’s development rather than unravel it. Movies such as McFarland for instance, can teach important lessons about putting yourself in another’s shoes. If your children enjoy video games, play with them. Try one of the many apps or games designed to develop empathy. No matter what the media, if you’re in the room helping your children think about what they’re watching and how it makes them feel, you can help them build meaningful insight.

Show your children you value face-to-face time with your actions, not just your words. One idea is to build device-free time into your family’s day. If everyone (yes, that means the adults are not allowed to check their phones for status updates or work emails) puts down their devices and spends time looking at each other, you will model the value of old-fashioned conversation, a skill many kids need to practice.

Research suggests this real-life face time may build crucial social emotional skills. For example, in a study I conducted at UCLA, I found that sixth graders who spent five days at an outdoor camp, with no access to screens, improved in their ability to understand nonverbal emotional cues. When the kids in our study spent time looking at each other, without the distractions of computers, phones, video games or television, they were able to better understand how others felt.

Finally, though the bonds between teens and their technology seem so strong that influencing their behavior may seem impossible, don’t give up. You can teach them to enjoy the everyday moments — even without a camera.

It worked for me. On our way home from our weekend at the beach, my daughter, her friend and I drove down the beautiful Pacific Coast Highway with the sun setting behind us. Again, the girls were taking photos. I decided to make a proposal. I suggested that after five minutes, the girls should do their best to not touch their phones for thirty minutes. To my surprise, not only did both agree, but also my daughter put her phone down at minute three (two minutes before requested)! Moreover, neither girl watched the clock. When the 30 minute time limit was up, I kept quiet, thrilled that they were both getting lost in the beauty and peace of the drive. Of course it was too good to last; a few minutes later they checked their texts. But during that half hour, we all enjoyed our real world surroundings. It seemed that these typical teenage girls did understand the value of sharing the moment with those of us in the car. And for that brief time, as we sped along the edge of land in the face of the setting sun our community of three trumped the distant roar of their virtual audience.

Want to learn even more about how social media affects our children? So does Dr. Uhls. She wants your help conducting research. All you need to do is ask your child to take this quick survey. After the survey, they can enter their name into a raffle to win a $50 Amazon gift card.