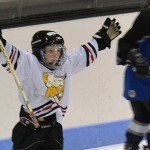 Help the competitive child win more than the game

5 tips for positive and healthy outcomes that don’t squash their competitive nature.

I know I’m not alone in worrying about the width and length of my child’s competitive streak. It’s hardly unusual for a child to be competitive. Nor is it bad. But there is a healthy competition and a unhealthy competition, says Jim Thompson, founder of the Positive Coaching Alliance. “Remember that comparison is inevitable and a normal human instinct,” says Hilary Levey Friedman, author of Playing to Win: Raising Children in a Competitive Culture. “It is a skill to admire qualities in others, but also to be able to pinpoint an area in which one excels.” That’s all very well and good, but what am I supposed to do to better manage my child’s competitive nature? Luckily, she and some other experts shared these five ideas.

Read Mary Pols account of learning about competition, her son, and surprisingly, herself.