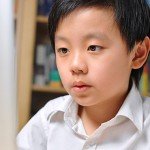 This summer, instead of fighting my son's video game obsession, I'm turning it into a learning opportunity. Here's my plan.

My son is screen-obsessed. He’s 10 years old, and it’s not unusual to find him in front of two screens, not just one, at the same time! He watches a YouTube video while playing a video game, and sometimes they aren’t even related. When we tell him to stop, he’ll quite sweetly say, “You should be glad I am multitasking, Mom!”

His dream summer would be spent in front of computer and game screens. So, now you understand what I am up against. But I have a plan: a video-game themed summer — with math, computer science, art, and reading sneaked in. Here’s the overview of my STEAM (Science Technology Engineering Art Math) summer curriculum with gaming as the theme:

I really love the Daily Word Problems workbook series. My kids have done a workbook every summer since kindergarten. Our elementary school doesn’t focus on word problems, but I like how it combines literacy with math while also teaching logical reasoning. Each problem is a puzzle to be solved by taking words and turning them into number sentences.

My son actually likes doing math; still, it typically takes us until December to complete the workbook. To spur him forward, I use a drawing game as a short-term reward and a big prize to ensure completion.

We play The Shape Game,  based on the book by Anthony Browne, for every correct math problem. It’s pretty simple and fun. I draw a random shape in whatever space is left over from the math problem, and my son takes turns it into something recognizable.

Here I draw a shape. My son turns it into a (seemingly unhappy) snail. 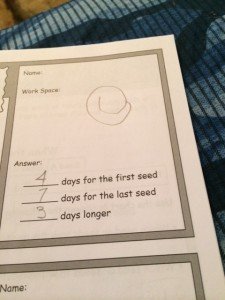 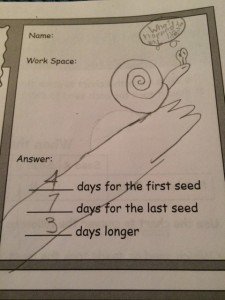 The Daily Word Problem workbook is designed for an academic school year, but it works beautifully as a summer workbook. With 36 weeks of five problems each week, we aim for three weeks at a sitting because completing 15 problems earns you a small prize, typically an outing for ice cream.

Finally, I dangle a big prize for completing the book. This summer, it will likely be a large Lego set. What do you know? They have Lego Minecraft sets!

When my son’s screen addiction really got out of hand, I decided that if you can’t beat ’em, join ’em. I told my son he could have screen time if he learns how to make his own video games. I found a tutor for him and his friends, and they happily learned Scratch and Java.

For the past two summers, my son and his friends have spent a week at computer camp designing Mods in Minecraft in teams. It feels like an expensive week of gaming, but I told the other moms that we are laying the groundwork for teaching the boys to program.

My computer programmer friends at work tell me Python is the language for gamers, and that it’s actually easier to learn than Java. So we’re going to wrap ourselves in Python using Teach Your Kids to Code: A Parent-Friendly Guide to Python Programming by Bryson Payne. I hope it’s very parent-friendly as I am not technical at all!

Usually what I do with my son is this: I throw the book in a conspicuous place in his room and wait a few days to see what happens.

Sometimes, he will find and devour the book. I am hoping the Python book will not require much adult intervention.

The video game Injustice: Gods Among Us is a fighting game and not meant to be educational, but it has spurred my son’s imagination. He delves deep into the world of DC and Marvel comics and most interestingly, into a frenzy of comic book drawing wherein he pits superhero against superhero in epic battles.

I am thrilled to watch my son draw and redraw his comics with more and more detail. I simply provide him with drawing materials — he prefers a #9 lead automatic pencil, large sketchbook, and soft eraser — and he goes to town. Here’s Batman versus Spiderman: 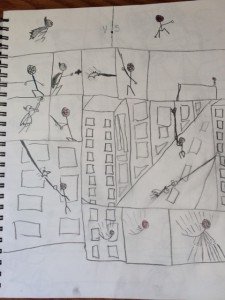 Sometimes he confers with me about which superheroes to pit against each other, and I must provide my reasoning regarding who would win. My knowledge is limited in this arena, so it hardly ever ends up in his work. I believe this is the first page to Nightwing vs. Green Arrow, on which I was at least consulted. 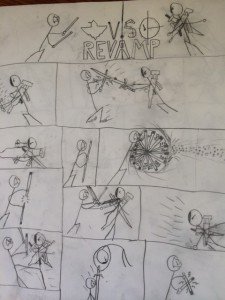 I’m noticing an uptick in Minecraft-themed chapter books, and my son will eagerly review any that come our way. I look forward to seeing what comes of this one: The Unofficial Holy Bible for Minecrafters: A Children’s Guide to the Old and New Testament.

My son has very limited knowledge of the Bible; I quizzed him and he basically only knows the Adam and Eve story, so I am thrilled that this is filling in all those gaps! This is a graphic novel using Minecraft as the basis of all the Bible stories. It is a diabolically clever idea.

Then there’s the series. My son really enjoyed Liam O’Donnell’s first Minecraft chapter book, Descent into Overworld, so he joined the beta readers for O’Donnell’s second book, Nether Nightmare. He’s finishing it this summer. His contribution so far is this: “I think magma cubes split into 4 instead if two (chapter 2).”

It’s not all Minecraft books, however. We’ve downloaded the recently released Rick Riordan ebook, The Crown of Ptolemy, which he can start reading right away.

But, we need to read other genres besides action adventure fantasy. To this end, we’ll be exploring historical fiction, which my son discovered that he enjoys from 4th grade read alouds this year.

Summer science: experiments that are easy to set up

I am lazy when it comes to science. My son and I will watch oodles of short science videos. He has his favorites, and I have a collection of science and nature ones that we both appreciate. We will do quick and easy, off-the-cuff experiments, like understanding the science of Japanese Ramune Soda, that require very little planning. We will also pick some that require no additional materials outside of what we have in our house, such as building a contraption to protect the egg.

We’ll be using Crazy for Science with Camelo the Science Fellow by Camelo Piazza and James Buckley and illustrated by Chad Geran. And in choosing science experiments to do, my son can check off a nonfiction book for his summer reading!

We also will be pulling experiment ideas from a DIY summer camp series on the What Do We Do All Day blog and from a collection of projects I’ve pinned on my Science Fun Pinterest board. The key to choosing will be this: my son is interested, the set-up is easy, and I only need to make one trip to get the materials.

So there you have it—my son’s summer of video gaming that includes science, math, computer programming, art, and reading. Did I miss anything?

How about you? Please share your ideas for getting your kids learning this summer! Thanks! I’d appreciate the ideas!

This article is part of a Summer Learning series. Also in the series:

How to roll fun and learning into summer

Summer’s here! What’s a mom to do with these kids?

Will reality live up to their dreams?