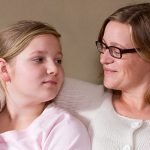 Advertisement
Parenting » Dilemmas, Health » Why is it so hard to talk to our kids about weight?

Why is it so hard to talk to our kids about weight?

Forget “the talk.” This topic is far more frightening for parents and teens.

When it comes to discussing weightier matters with kids, parents and kids are shying away from one huge topic. No, it’s not sex, or smoking, drinking, or even drugs. The conversation most likely to make both parent and child cringe is one about weight — especially if they have an even slightly overweight child.

Not good news in a nation where a third of our kids are overweight or obese and where our kids have shorter life expectancies because they’ll suffer from diseases related to obesity.

According to a “Raising Fit Kids” survey conducted by the WebMD/Stanford University FIT program, 22 percent of parents are uncomfortable talking about the risks and consequences of being overweight. Surprisingly, other prickly parent-child topics that make moms and dads wince don’t rank nearly as high. For parents of teens, sex ranked second place (12 percent), smoking and drugs third (6 percent), and alcohol placing fifth on the “uncomfortable” meter (5 percent) — basically trailing way behind. Parents may be picking up on a very real vibe from their kids: 72 percent of the kids surveyed said a discussion about their weight with their parents would be more embarrassing for them than it would be for their parents.

And kids’ body types vary, just as adults’ do. In my family, for example, we tended to grow up, then out, then up, then out, resulting in lean phases interspersed with chubby phases due to awkward growth spurts.

What’s more, talking to kids about maintaining a healthy weight involves looking at our own habits and modeling healthy ones — something that’s not always easy to do.

Experts quoted on WebMD urge parents to make healthy weight discussions part of their kids’ daily lives early on, no matter what your child’s body type. How are you handling this discussion at home? Are you talking about it openly, sneaking in little lessons, modeling behavior, or avoiding the subject altogether?