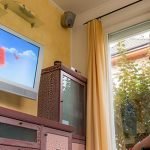 6 easy ways to cut back on TV time

Replace channel surfing with overt diversions, and your kids won't even miss the tube.

More than one day a week. That’s how much time most U.S. kids spend in front of a television. According to a 2009 Nielsen report, the average American child, ages 2 to 5, watches TV at least 32 hours a week; kids ages 7 to 11, more than 28 hours. If you’d like to prevent your children from becoming couch spuds, here are six simple strategies for tuning out TV and turning them on to other interests.

Don’t forget books, the number one TV tamer. Conversely, say many studies, steady TV watching eclipses reading and literacy. According to a report from the University of Michigan Health System, children from TV-centric households watch more television and read less than other kids. More sobering, young children exposed to constant TV are less likely to be able to read than other kids.

So read to your children, with your children, and encourage them to read on their own. Reading stimulates kids’ minds and imaginations in ways that TV can’t — and fostering a love of books is one of the best ways to set them up for academic success. If you’re not sure which books to choose, ask a teacher or librarian for recommendations. You can also check out books on tape from the library, which fires kids’ imaginations and promotes active listening. Audio books are a lifesaver for long car drives — or when you’d rather just listen along with your children.