When the teacher is the bully

Bullying has become a national issue. But what do you do if the school bully is your child's teacher?

When Karen Eubank’s son first complained about his “mean” teacher, she took it with a grain of salt. “Usually ‘mean’ just means a teacher makes you study, is demanding, or wants you to answer questions,” says the Dallas, TX mom. “Not that [the teacher’s] being verbally abusive.”

Unfortunately, that’s exactly what it meant. Eubank had transferred her son from a private school to a new charter that a friend recommended. During the tour, Eubank fell in love with the school — there was a garden, they played music at lunch, the school was “just beautiful,” she says.

But after the school year began, her fourth grader began saying that he didn’t want to go to school. Every day before school, he claimed he felt nauseated. Every afternoon at pickup, he was angry. Eubank assumed the boy was just adjusting to his new school. It wasn’t until Halloween that Eubanks discovered the chilling truth. She asked a child in the class next door to her son’s how he liked school. He replied it that he was fine, but that her son “wasn’t having such a good time.” The teacher, the boy told her, “yells at him all the time and we can hear it in the next room.”

Eubank set up meetings — first with the teacher — who insisted the problem was her son’s inattentiveness — and then the principal — who refused to do anything. “They both pulled me in to say they were worried about my kid,” she says, “that he couldn’t pay attention, couldn’t focus. They were both basically hinting that my son needed medication.” Taking respected education professionals at their word, Eubank took her son for a psychological evaluation at Baylor University and learned there was nothing wrong with him.

An active school volunteer, Eubank chatted up other parents who all noted that her son’s teacher never smiled. Meanwhile, her son shared more detail about his teacher. “‘She picks on me and is mean,’ he told me,” says Eubank. “‘I pay attention,’ he insisted, ‘but I look out the window because I’d rather look at trees and listen than look at her angry face.’” But when her son looked out the window, the teacher would regularly humiliate him in front of the other students, yelling at him and slamming her hand on his desk.

Within a few days, following another hand-slamming-the-desk episode, in desperation Eubank pulled her son out of school and started homeschooling.

Another type of bully

Bullying is getting national attention and being taken more seriously than in days past. But the focus is decidedly on kid-on-kid abuse. While the mean girls, the taunters and tormentors, the physical abusers, and the excluders are very real threats, so too are educators who abuse their power over the very kids they are supposed to protect.

But when teachers verbally and even physically abuse kids, the abuse is often blatant and rarely called what it is — bullying — reinforcing the false notion that only kids, not the grown-ups in charge, are bullies. (Read 12 bullying myths.)

Amid mounting data that bullying is on the rise, there’s a glaring absence of statistics on adult school bullies. In part, perhaps, because bullying by a teacher or principal is far more complex to identify, address, and rectify. It’s difficult to know what to make of a teacher who crosses the line from basic discipline to regularly berating, intimidating, humiliating (and even physically abusing) a student — so much so that a child’s afraid to be in school.

In response to another GreatSchools article on stopping bullying , a brave teacher confessed (in a comment) to having bullied students in the past — until he changed his ways. “I became a teacher when I was in my early 20s, and I was horrible to the kids. I was a monstrous bully to the special ed kids I taught … I was eventually forced to resign, and after three years, I realized why I was wrong. I changed completely, and when I went back to teaching, I never raised my voice or made any threats. It was wonderful. I learned to lead by example…”

His honest admission prompted us to look further into bully teachers, a topic rarely discussed. We started by asking GreatSchools readers if they’d ever had a teacher who was a bully. Dozens of people came forward with painful stories — but none had a clear way to redress the situation. When children bully other children, experts offer viable theories on how to deal with the problem: Fight back, walk away, ignore the bully and he’ll move on, tell a teacher, tell your parents, ask any adult for help.

But when the bully is the grown-up in charge, how should a child respond? With a bully teacher, fighting back, walking out of the class, or ignoring the teacher are hardly viable solutions, and ones that will most likely get kids in even more trouble. Even telling another teacher or the principal gets tricky. At the very least, the child knows by telling a teacher, another adult at the school, or even their own parents, that the problem isn’t likely to be solved overnight. So what’s a kid — or a parent — to do?

The first step, perhaps, is to listen to the stories and learn from others, like retired teacher Elaine Sigal. Her bully was the principal at the New Jersey high school where she taught. Sigal endured anti-Semitic comments, watched as the principal screamed at African-American students, and cringed when the principal mocked parents with accents. Other teachers were terrified to be seen talking to Sigal, else they face the principal’s wrath. “They’d hide behind a cabinet door,” she says. After battling it out with the principal for two-and-a-half years, she threw in the towel and transferred to a Hebrew school.

Sigal thinks that there might be another way — and now as an educational consultant (she launched a startup called Stizzil to help kids with tutoring, test prep, self-esteem, and more), she’s been on the frontlines with bully teachers. One of her female students wrote about being bullied by her second grade teacher who made her “a pariah;” the negative effects lasted through middle school. Sigal accompanied a male student’s immigrant parent on a visit to a school counselor. “The [counselor] puts her head down on her desk and says to me [in front of the child’s parent], ‘I have no idea why you’re wasting your time, he’s another dumb [racial slur].’” Sigal says.

In the face of such blatant bullying, Sigal offers this advice: “First thing you have to do is document, document, document.” Write down the date, the time, and exactly what happened. Despite the obvious pain you’re feeling as a parent, Sigal says, it’s crucial to be as reasonable and objective as possible. To help give context to what you document, it’s a good idea to look up the laws and policies related to bullying in your state. In California, for example, two key elements of the antibullying laws and policies are the purpose and scope of the bullying. Understanding what violates the law can help parents as they document what they see and hear.

If the situation isn’t too egregious, meet with the teacher to see if you can find a resolution. If that doesn’t work, Sigal recommends learning what you can from everyone at school — your child, other kids, parents in the class. Volunteer at school, drive the carpool, keep your ear to the ground, all the while documenting everything you learn. During this fact-finding period, Sigal says to start building a support network of parents — after all, one parent’s complaints can easily be waved off, while a group of concerned parents has more chance of being heard.

Sigal advises parents to resist storming the principal’s office right away. “Follow the chain of command,” she says, starting with, say, a senior teacher or the head of that teacher’s department, then the vice principal, principal, principal’s supervisor, and superintendent. This approach works in your favor for two reasons: One, the closer someone is to the problem, the more likely they’ll be able to take swift, effective action; and two, when you go to the top, one of the first questions will be, ‘Who have you talked to about this, and what did they say?’ If you can’t answer effectively, you’re likely to be directed back to those you’ve skipped. And always, says Sigal, document every bullying incident. “If you have documentation for a couple of months, they can’t ignore that,” Sigal says. “And if they try to, I’d say ‘I’m going to the newspaper.’”

When it comes to protecting kids from bully teachers, sadly kids are in a vulnerable position — and ill-equipped to fight the battle on their own.

Case in point: A high school junior in Boston, MA who now needs an attorney’s help to clear his school record. The teen repeatedly — and in vain — asked to be moved out of a class where he felt like the target of an abusive teacher, says his lawyer Daniel Maloney. The acrimonious situation came to a head one day when the boy vented his frustrations — and it sounded like a threat. He was summarily suspended, putting a mar on his permanent record that may jeopardize his college prospects. Moral of the story? The teen was unable to defend himself against the bully teacher and now needs legal help to protect his future.

When it comes to bully teachers, there’s no real silver lining — but there are different routes parents can take. In Eubank’s case, homeschooling was the best choice. Now her son is happily back in a public high school and doing well with “brilliant teachers,” she says. For Sigal, a school transfer did the trick. But she believes following certain protocol — like documenting every incident, building a support system, and working up the chain of command — can protect kids from continued trauma at the hands of a bully teacher and save them from the ordeal of leaving a school altogether. But, says Sigal, the fight to protect your child from a bully teacher may not (and usually won’t) be easy. 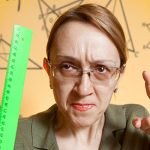