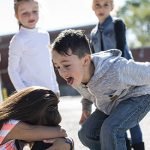 Advertisement
Parenting » Emotional smarts » Why are some bullies so popular?

Why are some bullies so popular?

Kids dominate their social scene with strategic use of mocking, gossip, and exclusion.

It’s our culture’s dirty little secret: We’re not supposed to like bullies. But research shows that we — and especially kids as young as 10 and 11 — do like them (at least sometimes). The problem may be that they’re not called bullies. Instead, they’re often recognized as leaders. In many cases, they’re the popular kids.

Bullying has many causes and takes many forms. A more subtle type of bullying that some kids use for social domination uses powerful, and often popularity-building tactics: Mocking, gossip, and exclusion.

In a study of 367 5th and 6th graders, researchers found that strategic emotional bullying keeps kids in control of their groups — and actually increases their popularity. So how can schools use this information to create more effective anti-bullying policies without punishing friendships and thwarting kids’ budding leadership skills?

Part of the answer, according to study lead Ryan E. Adams, a statistician and assistant professor of pediatrics at Cincinnati Children’s Hospital who studies adolescent relationships, may lie in giving the other children (not the bullies, not the victims) a more active role in ending victimization — and could mirror Finland’s highly successful anti-bullying program, KiVa, which focuses on the role of bystanders.

First, we need to teach kids to recognize and understand what emotional victimization is: hurt feelings, being purposely left out, jokes at another person’s expense, etc.  Second, we need to make it clear that it’s not okay. Finally, the step that will make the biggest difference is to teach kids to stop reinforcing this type of bullying behavior.  A lot of times kids use aggression to get what they want and keep their standing in their peer group and no one stops them. They’re “good” at it and they don’t get negative feedback.  For example, “we need to teach kids not to laugh. That’s very reinforcing, even if it’s nervous laughter,” Adams says. “Kids don’t have to step in and defend the [bullied] person,” Adams says, “just not reinforcing helps.”

Will these practices change social dynamics among kids? Hopefully. But it won’t interfere with kids developing leadership skills, Dr. Adams says. “If you call a name or shun someone, your intent is to hurt them.” Not exactly the kind of leadership we want to cultivate or reward.

On the upside, popularity isn’t automatically a sign of being a bully. “You can be dominant socially without using aggression to get there,” Dr. Adams says. “Honestly, when you look at (the sources of) popularity, it often comes down to kids who are nice.”

Does your school have an anti-bullying policy, and does it give bystanders a role? Most importantly, is it effective?