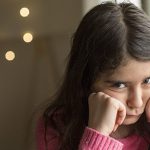 When your child has trouble handling big feelings, here’s how parents can help them feel better now — and in the long run.

Your child stomps around the house after a long day at school, sulks in a quiet rage when asked to pick up their clothes off the floor, or has a meltdown when told to turn off a screen. Sound familiar?

Children tend to lose control of their emotions easily and more intensely than parents might like. At this age, “They’re showing and telling you their feelings the only way they know how,” explains Nanika Coor, a Brooklyn-based psychologist who specializes in working with parents. It helps to remind yourself that however articulate they are, third, fourth, and fifth graders are still kids whose brains and bodies have a long way to go before adulthood. If they haven’t yet learned to express themselves more clearly — as well as safely and respectfully — that’s okay. Here’s how parents can help.

Understand that your child’s anger is a “cover-up emotion”

When a child is disrespectful and defiant, a parent’s impulse may be to pile on punishments and remove privileges. But responding angrily to your child’s anger only intensifies the emotional storm. The reason this doesn’t work, say child development experts who focus on positive discipline, is that your child’s anger isn’t the real problem. It’s a symptom of what your child is really feeling. It’s more effective, then, to look at their anger as a “cover-up emotion” that is masking the emotions fueling the anger, including anxiety, fear, loneliness, and insecurity.

Understanding your child’s overwhelming feelings is needed now more than ever. Months into a pandemic that’s keeping most families in close quarters 24/7, there’s even more opportunity for tempers to flare. “These days, I’m hearing a lot about kids’ anger,” says Coor. “Kids who were away from their parents [at school] are being told what to do all the time.”

By doing emotional detective work — Is my child feeling lonely because they feel left out at school? Did I interrupt them in the middle of a game so they feel frustrated? Are they scared of my angry reaction if they didn’t finish their math homework? — a parent can help a child channel their emotions into something more manageable and less explosive. After all, kids this age are years from having a fully developed prefrontal cortex, which is the brain’s control center for executive function that helps humans regulate their difficult feelings.

Let them have their feelings (even the “bad” ones)

“It’s so disrespectful to not let people, including our children, have their feelings,” says Jane Nelsen, author of the Positive Discipline series. First, acknowledge their anger or frustration. Next, help them find a way to express their strong feelings safely and respectfully. Respecting a child’s emotions does not mean telling a child to calm down, says Ayden Sanders, a teen who struggled with anger as a child. “My mom and dad would tell me to calm down. That only makes it worse,” he explains. Indeed, trying to tell someone not to express, and thereby feel, their emotions never helps.

Instead, simply describe the behavior you’re observing as a way of validating what they’re feeling. This is a first step toward building your child’s self-awareness and self-regulation — and a helpful step away from chaos and confusion. Nelsen suggests something as simple as, “I can see you’re really angry right now. Remember I love you very much and I am here if you need a hug.’ If they’re open to it, she says, simply ask, ‘Can you tell me more?’”

Coor agrees that empathy does wonders to calm the storm. “Work to see the situation from their point of view,” she says. “State your understanding of it. When kids feel understood, they’re more likely to settle down, even if things don’t work out the way they wanted them to.”

Focus on connection, not punishment

When your child is frustrated, angry, or raging, try your best not to rush to correct them, says Coor. Instead, try to connect with them. Why? Connecting with your child helps both of you to get to the heart of what caused the outburst in the first place. It’s very possible your child seemed angry about cleaning their room, but when tempers have cooled, there may be a solution to a problem — since anger is an expression of a problem waiting for a solution — that can be solved. Maybe you always ask them to clean their room before simply checking in about their day. Maybe they feel you are quick to nag or admonish instead of first giving them a hug (yes, elementary schoolers benefit from hugs, even if they get all eye-rolly about it). Maybe they need some downtime after school or on Saturday morning before turning to chores. This is not to suggest that they get a pass from doing what’s expected. But if the end goal is to have a close, honest relationship with your child, some extra homework on a parent’s part will pay off in the long run.

Much of a child’s anger is justifiable (so just listen)

Another reason for your third, fourth, or fifth grader’s anger, aside from school, social, and family pressures, is that your child may be reacting with outrage at environmental, political, and racial problems. Developmentally, kids ages 7 to 11 are working to create a strong sense of self that’s independent from their parents. They are also rather newly aware of the bigger world around them, and their sense of fairness, right and wrong, and justice are strong.

“A parent’s first impulse is to try to make them feel better,” says Coor. “But you can’t make your child feel anything. What you can do is be there for them. Just the words ‘Tell me about it, I’m here,’ will let them know you are there for them. You don’t need to solve the problem. They may just need a listening ear and express their frustration.”

Know what’s “normal,” and what’s not

For the most part, a child’s anger is pretty typical and developmentally appropriate. But it’s a good idea to seek help when your child’s anger — emotional or physical — hurts other family members or themself. “If you have a really volatile kid, I would go for help,” says Coor. “You can try as hard as you can, but there are times you need an extra human.”

Also know that children with ADHD have an especially hard time with frustration and anger and may be far more reactive. If you suspect your child has an underlying behavioral or learning issue, third through fifth grade is a good time to find out and get an evaluation and professional support.

This is what happened for Jamie Sanders, who blogs about her parenting experience. Her son, Ayden, was diagnosed with ADHD. Now, Sanders and her husband use positive discipline to handle their son’s strong emotions, such as talking through any difficult moments they have, and discussing ways they can all do better. “He does still occasionally have outbursts,” says Sanders. “But it’s not anywhere near as bad and not very often. Our home life is much calmer now.”

Model behavior you want to see

After a difficult scene with your child, circle back when everyone has calmed down. If you need to apologize for losing your cool, apologize. (Remember: you are modeling how to say, “I’m sorry.”) “This can go a long way to mending hurt feelings,” says Nelsen, and teaches your child that anyone can make mistakes, even parents.

Plus, says Nelsen, “How can you expect children to control their behavior when you don’t model controlling your own?” Even when it seems they aren’t, children are looking to you as an example. “If you are a person who throws a stapler across the room, don’t be surprised if your child does the same,” says Coor. Conversely, if you’re angry, but can calmly tell your child in respectful words what is bothering you, they are learning to express emotions in a way that lets them, and the other person, feel safe and understood.

Nelsen offers an example of good modeling: “‘Wow, you’re really angry. I wonder what I did to upset you so much? I need some time out until I can talk to you more respectfully.’ Or, ‘What would help us right now? Would it help us to take time out? I’m here to listen.’ ”

Ayden’s advice for parents dealing with their child’s anger? “I’ve thought about this a lot,” he says, perhaps having picked up some positive discipline techniques modeled by his parents. “I would leave them alone if they’re mad and talk to them after about it, when they’re more chilled-out.”