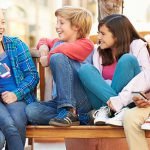 Inside the 6th grader’s brain

What insights can neuroscience offer parents about their developing sixth graders?

“This hill is savage! Let’s zoom down it on our hoverboards.”

Sixth graders are often reckless, carpe diem action-seekers bouncing from one high-stimulus activity to the next. Accident prone? You betcha. My sixth grade daughter has a classmate who’s been to the ER five times this year, for two sprained ankles, a broken wrist, a broken arm, and a concussion.

Impulse control? Sorry, that region of the brain — the frontal cortex — is still embryonic. Sixth graders might eat desserts until they get sick, they often leap before they look, and — endearingly — they frequently raise their hands enthusiastically in class before they realize they don’t know the answer.

Dopamine is a hormone that encourages novelty-seeking, sensation-hunting behavior and sixth graders are, alarmingly, ditsy dopes on dopamine. Self-control isn’t part of their neurological package.

From sixth grade to maturity, the brain’s primary growth area is the prefrontal cortex of the frontal lobes, a region that’s referred to as the “CEO” of the brain. This cognitive control or executive function center is responsible for general intelligence and activity like mediating conflicting emotions, making ethical decisions, inhibiting emotional and sexual urges, and predicting future events. If you’ve noticed your 11-year-old son can be frightfully disorganized, or that your tween daughter now seeks a private area for secret items or a journal, you can trace these behaviors back to the brain of their brains, so to speak.

And right now it’s changing tremendously in a sort of synaptic pruning process that fortifies certain neural highways while virtually abandoning the majority of others. The transitional activity of this rewiring phase is disorienting for your sixth grader, and often rears its ugly head in the form of recklessness, poor decision-making, and emotional outbursts.

Yikes! What’s growing? If you haven’t already, tell your child immediately about the physical changes ahead, which are triggered by their adolescent hormone releases. For girls: breasts, acne, pubic hair, body hair, menstruation, wider hips. For boys: underarm hair, pubic hair, facial hair, acne, larger testicles, wet dreams, erections. If you don’t warn your pre-pubescent progeny, they’ll be freaked out by “gross” surprises. Sixth graders, especially girls, are often self-conscious about their body’s developments, with anxiety about how others view them. Plus, tell them — even if they squirm and cringe — that they might start to develop crushes.

Many sixth graders want to gorge on unhealthy junk food because the pleasure centers of their brains develop sooner than their ability to calculate long-term consequences. They’ll beg for it. But don’t cave in: junk food can lead to obesity, damage their immune systems, and contain chemicals that can disrupt their hormonal secretions.

Instead, help your child eat healthy food and explain that it fosters their brain development. The Centers for Disease Control recommends a diet filled with a variety of fruits, vegetables, whole grains, and lean protein that is moderate in sugar, salt, and saturated fats. This doesn’t mean putting your child on a no-fat diet. So-called “healthy fats,” such as egg yolks, avocado, and salmon, are known to support brain function. If you can, help your child avoid the obesity that weighs down almost 20 percent of U.S. children this age. Studies show obesity can eventually cause a decline in the brain’s cognitive abilities, particularly in learning and memory.

It’s equally important to protect your tween from eating disorders — for both their physical and mental health. Studies indicate that bulimia can negatively affect brain regions involved in the reward circuitry, and according to researchers at Yale, anorexia may shrink grey matter.

Tuning in to tweens

An article in Journal of Adolescent Research called “Window of Opportunity? Adolescence, Music, and Algebra” reports that in a study of 6,026 middle schoolers, “students enrolled in formal instrumental or choral music instruction … outperformed [their peers]” in algebra. The correlation was especially noted with African-American pupils. Seem like a coincidence? Think again: research suggests that musicians process music in the same cortical regions that adolescents process algebra.

Girls’ and boys’ brains are vastly different in sixth grade. The National Institute of Health discovered that the halfway mark in brain development (called the inflection point) occurs in females just before they turn 11, but dawdling males don’t get there until they’re nearly 15.

Academic performance may vary by gender at this age. In girls, language and fine motor skills generally mature first, up to six years earlier. In the past, girls were found to lag behind boys in math, raising the possibility that girls’ brain development differed from boys. But since recent research finds girls now perform as well as boys in math, a more probable cause for the gender gap is culture, not biology.