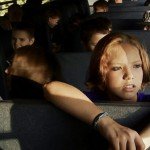 One scary movie you might want your child to see

The documentary Bully captures what’s really going on in schools: rampant bullying and the utter failure of adults to stop it.

“The last couple days we heard that Tyler had his head shoved into a wall locker, they said he was a geek.” We hear the voice of Tyler’s father speaking over home movies of a sandy-haired boy clowning around in the living room. “Some kids had told him that he was worthless, to go hang himself, and I think he got to a point to where enough was enough.” Suddenly we’re at a fresh gravesite and we understand that the worst has occurred: Tyler killed himself.

It’s only moments into the staggering documentary called Bully, but already a number of us are hiding our faces as we frankly lose it in the banal setting of the GreatSchools.org conference room. It’s a workday, after all, and the morning screening has taken us by surprise.

GreatSchools got a chance to preview the Lee Hirsch film before its release under a storm of controversy in April 2012. Its message is urgent. Every year 13 million kids are bullied, as the movie tells us, making it the most common form of violence against children in America. It’s equally clear who needs to see this movie: many children (children who have been bullied, who have bullied others, or who have witnessed bullying) as well as every educator and parent in America.

The film, which follows the experiences of five children whose lives have been forever changed by bullying, isn’t for the faint of heart. Watching it feels like having your chest opened with a can opener then sprinkled with rock salt. The music is haunting, the voices of parents who have lost their children are unspeakably sad, and the language is raw: apparently many kids swear like truck drivers when not in the presence of adults.

We meet Ja’Meya, an African American middle schooler, whose good grades and quiet demeanor earned her years of abuse for being a Goody Two-shoes. One day she snapped. Taking matters into her own hands, she brought her mother’s loaded gun onto the school bus to protect herself from relentless tormenters. She waved it around to show them she wasn’t taking any more, but no shots were fired and no one was hurt. After being arrested and charged with multiple felony counts, she was sent to juvie, where, if her heavy lids and listlessness offer any indication, it’s evident that she was heavily medicated. Though no one could condone her behavior, it’s painfully obvious that this little girl, who had never displayed any behavioral problems before, has been pushed to the brink of insanity by bullying.

But it’s the real-time footage of bullying that makes this movie far more powerful than any parade of experts on an evening news magazine — and much more germane for young viewers. Finally, children’s experience is put up front and center without adult rhetoric muddying the issue. The low-profile filmmakers, using a tiny video camera that more resembles a device for still photography, spent weeks on school campuses filming all sorts of events — from school performances to classes. The result is that children forgot the filmmakers were there and actual bullying proceeded as it does in real life: uninhibited by adult eyes. We witness cruelty, verbal obscenities, and physical assault of the sort that many parents remain blissfully ignorant are part and parcel of their children’s lives.

In fact, the obliviousness of adults and their failure to take bullying seriously is one of the most disturbing aspects of Bully. We witness graphic scenes from the violent frontlines of childhood, but when kids attempt to report back from the warzone of their daily lives, the adults fail, again and again, to get it. This bad behavior on the part of adults serves as an excellent talking point with your child — to build a bridge with them and make them understand you will never respond the same way. And it’s one of the strongest reasons to overlook the movie’s PG-13 rating. In the film, a brief respite of domestic normality for a bullied boy turns noxious when his otherwise well-meaning father chides him for being bullied, inquiring if he actually likes it. In another excruciating scene, a teacher pressures a bullied boy to shake hands with his clearly unrepentant tormenter. When the bullied child refuses, the teacher suggests it’s his fault for not being friendly.

Finally, and most egregiously, we get to watch principals and school board officials spin their “kids will be kids” PR campaigns exonerating themselves of responsibility. In a scene that makes my stomach turn to even recall, a principal assures parents whose son has been repeatedly assaulted and whose head has been crushed underneath a bus seat: “I’ve been on that bus and those kids are as good as gold.”

We’ve all seen documentaries that push the limits to make their point, with snow jobs, exaggeration, and willful lack of balance. But this is no Michael Moore flick. At the end of the screening, we asked about the adults whose actions we found so appalling. Had they seen the film? How many lawsuits were pending from angry educators? But the filmmakers went to great lengths to be careful. After the film had been edited into a cohesive story, they returned and watched the film with those adults who got it terribly wrong. The fact that these educators made no objection to the film’s release redeems them to some extent. These education professionals may have been clueless, but they meant no harm.

So when the Motion Picture Association of America initially gave the film an R rating for the seven-odd f-bombs issuing from the mouths of babes, it provoked uproar about the state of our ratings system and whether the film would lose an important target audience. A Michigan high school student started a change.org petition asking the MPAA to give the film a PG-13 rating instead. The petition received more than 500,000 signatures, and Bully ultimately received its PG-13 rating.

Which doesn’t mean it’s not a tough movie to watch. All children are different and only a parent can know what’s right for their kid. But it’s worth asking in the case of a film that depicts a range of ordinary public schools, events which occur in school hallways and on school buses every day, what exactly are we protecting tweens and teens from by not letting them see this movie? For their part, the filmmakers are attempting to make this film ignite real change: they’ve created a 70-page facilitator’s guide to help educators and parents use the film to spur conversations with kids. In the end this isn’t adults-only content. It’s real, live, kid-on-kid violence, and it starts very young. In the movie, the youngest subject, who took his own life, was 11.

In the wake of countless school shootings and many too many heartbreaking youth suicides, the bullying problem in our society is screaming for attention. For many children, our schools are not the safe places we parents assume them to be. For all our parental handwringing, new laws aimed at taking bullying more seriously, and anti-bullying organizations earnestly implementing programs, in too many schools we are still failing to protect children from the very people they should have no reason to fear — other children.

The teen who shot five other kids at a Cleveland-area high school in 2012, for example, has been characterized as a victim of bullying. But even if this is not the case, the story reminds us of some of the endemic problems that allow bullying to proliferate. The boy apparently warned his friends of his intentions two days in advance, but nothing was done about it. According to the U.S. Secret Service, which collects statistics on school violence, prior knowledge is the norm in school shootings. In 81 percent of the incidents, at least one person knew that the attack would take place and the vast majority of those informed were friends, schoolmates, or siblings — that is, other kids. Not every school shooting is related to bullying, but neither do they happen in a vacuum — they often transpire in a culture where other kids (and sometimes adults) have known there were problems but looked the other way.

For this reason, Bully may be the most important scary movie your children ever see.

Check out the trailer for Bully, a close-up — and terrifying — look at what’s happening in many of our schools.