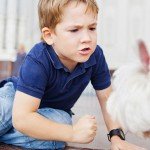 Advertisement
Parenting » Dilemmas, Early learning » Is it normal for your preschooler to hurt animals?

Is it normal for your preschooler to hurt animals?

When a young child hurts animals, the big question is: was it accidental or intentional?

“Most kids love animals and feel protective of them,” says pediatrician Laurel Schultz. But harming animals happens. The key is to recognize why your child is doing it and whether or not the harm is intentional.

If a small child accidently hugs the pet rabbit a little too hard, or chases the cat to see what it’ll do, it’s something to address, but not something to worry about.
But intentional harm is different. Preschool teacher Eric Wilson, psychologist John Duffy, and pediatrician Schultz all say that hurting animals intentionally isn’t normal — it’s also behavior they rarely see.

Why animal harm can happen

Mary Helen Immordino Yang, a neuroscientist and human development psychologist at the University of Southern California, says the preschool years are a time when children imitate others and learn to represent other people’s perspectives in their own minds.

So when your child pulls at Fido’s ears, he’s making sense of actions he witnessed and doesn’t understand — or has yet to experience. Often, she says, children are acting out something they saw on TV. Since that is inevitable, try giving your child safe ways to act out those experiences, says Immordino-Yang. “They need to learn that they can act that way with a doll or a stuffed animal, but they can’t act that way with another living thing, like a dog or pet.”

Helping your preschooler understand his actions

Focus on the context of your child’s violence and help him understand his actions. To illustrate, Immordino-Yang describes how she made it clear to her son that he was hurting the family dog, Sandy. “When my son was about 4, we got our first dog,” she says. “He just loved this dog so much that he’d squeeze him and hug him really hard.” So she explained the situation to her son in simple terms. “If you squeeze Sandy and you’re hugging him, you might think you’re really showing him how much you love him; but if you let go and then he runs away from you, that’s a sign that he didn’t like it.”

That was her test. If the dog runs away when her child lets go, her child needs to find a gentler way to show love.

Wilson’s approach is to talk to his preschoolers about respecting all creatures, including worms and insects. “Sometimes, some of the kids want to squash bugs, and I tell them, ‘Everyone gets to go home today. I get to go home, you get to go home, and that bug gets to go home, too.’ We reinforce the idea that we are a family and we treat everyone gently.”

As a parent, you know your child best. Immordino-Yang suggests watching your child with animals and asking yourself the following questions: Are they doing it for show? Or are they actually engaged in pretend play where they are acting violently? “Trust your own gut as a parent and look at the child and see why you think they are acting that way,” she says. ”It’s a normal reaction for kids who are abused to act that out on pets because they are trying to act out those actions.”

According to Wilson, Schultz, and Duffy, a child who deliberately hurts animals — in play or real life – and shows no remorse should get help immediately. “I don’t think it should even be in the same category as hitting and biting,” says Duffy. “It’s very uncommon, and it could indicate a serious emotional disturbance. The child needs to get therapy right away.”

Immordino-Yang agrees. If children don’t naturally or empathically experience other people’s (or in this case, animals’) pain, then they need to learn rules and acceptable behaviors to keep others around them safe. Like Duffy, she suggests working with a child psychologist early on to help your child learn what’s okay — and what isn’t.

Enjoying our preschool behavior series, Is it normal? Get the lowdown on other actions that confound parents of young children, including: shyness, confidence, and trouble with transitions; biting and hitting; behavior changes at home versus school; learning manners and nice words; lying, hiding things, and stealing; gun play; “magic years” behaviors, like dressing up, cross-dressing, and imaginary friends; and more!