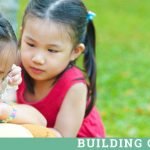 Sometimes, sorry, please, and thank you seem like the hardest words for your little one to utter.

“Can I have more juice, please?”

“Can you say thank you?”

Parents of young children find themselves repeating these imprecations over and over — and pediatrician Laurel Schultz says that’s exactly what you need to do.

“Remember that your child hasn’t been around that long; it’s your job to teach the rules,” Schultz says. “Parents will tell me, ‘I tried that, but it didn’t work!’ And I say, ‘Did you try it 500 times? A thousand times?’ As parents, we have to model good manners and hope that it becomes reflexive over time. For most kids, it does.”

Preschool teacher Eric Wilson says many preschoolers don’t say please or thank you, particularly when they first start school. “It’s normal, but it’s something we work with them on all the time,” he says. “If they say, ‘Give me that!’ we’ll say, ‘give me that, please.’ ”

Helping your preschooler say sorry and mean it

When it comes to apologies, it’s more important for your child to have empathy, a key emotional component to feeling sorry.

“You don’t want them to just say the words because they’ve been coerced, you want them to understand what they did and how it made the other person feel,” says Schultz.

Schultz describes an incident when her son stomped on another child’s lunch box. “It was a girl he liked and I think he did it out of pure devotion, but the little girl was very upset,” Schultz recalls. “When he got home from school we talked about what happened, and what he could do about it. He drew her a picture covered with hearts, and he spent a lot of time on it. I think that was a more meaningful lesson than if he’d been shamed into saying he was sorry.”

In cases when a child hurts another child by accident — if the two are wrestling, for example, and one bangs her head — you can turn the incident into a lesson on empathy. Talk to your child about what happened and suggest that your child give the other child a hug, or make her a card. “It’s not an apology as much as a human gesture, and it shows kids that we feel better when we reach out and try to help,” says Schultz.

“I almost never have kids say sorry,” says preschool teacher Miri Moyal. “It becomes just a word. Instead, I ask them to look at their friend’s face. Then you build the sympathy and the empathy. Otherwise, they’ll just say sorry and move on and it means nothing.”

Wilson says breakthrough moments when one child shows empathy for another are the best part of his job as a preschool teacher. “When I see kids — particularly the kids who had a tough time in the beginning — being nice to each other, stepping up and helping each other, [it’s] the highlight of my year,” he says.

Craig Bailey, a former preschool teacher and a researcher with the Yale Center for Emotional Intelligence’s preschool program, suggests working empathy lessons into story time at home. When you’re reading a book where a character is sad, disappointed, or hurt, help your child take that character’s perspective by asking questions like, “How do you think Frog felt?” Then, come up with ways to help Frog feel better — in addition to Toad saying he’s sorry. The result may not be specific nice words, but you may find your child being kinder overall.

It’s all about tone

“Can you open this?” asks 4-year-old Joe as he hands his teacher, Miri Moyal, his thermos full of soup. He didn’t use the magic word, but he did ask nicely. Moyal says she’s less concerned with hearing the word please and more concerned about the tone of a child’s request. “Please isn’t required all of the time,” Moyal says. Instead, she focuses on modeling saying things nicely so that the kids will follow. “Otherwise, we would have to say please all the time,” she laughs.

Everyone hears nice words but you

“I often hear that my kids are the most polite kids,” says parent educator Nancy Gnass, “but I don’t see it at home.”

Working with parents, Gnass know that’s a common tale: really polite kids who don’t bother using those nice words at home. So just because you don’t hear the magic words come out of your child’s mouth, “it doesn’t mean they haven’t learned it and are using it elsewhere,” she says.

Enjoying our preschool behavior series, Is it normal? Get the lowdown on other actions that confound parents of young children, including: biting and hitting; behavior changes at school versus home; hurting animals; shyness, confidence, and trouble with transitions; lying, hiding things, and stealing; gun play; “magic years” behaviors, like dressing up, cross-dressing, and imaginary friends; and more!