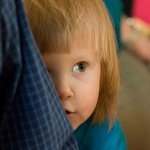 Preschoolers can be confident and independent one moment, then clingy and shy (or slow to warm) at transition time. What's going on — and is it normal?

When Elliot started preschool, his mother went with him. Not for the first hour, or the first day, or even the first week: it was a month before he felt comfortable at school without her. She tried ducking out for short intervals so he’d get used to her absence, but every time she left, Elliott became hysterical — and didn’t stop crying until she came back. Nothing the preschool teachers did made any difference. He sat by the door and wouldn’t let anyone near him. Finally, the teachers and Elliott’s mother decided that she should stay with him until he felt comfortable. A full month later, he did.

Slow to warm, not shy

“Some kids are just shyer than others,” says preschool teacher Eric Wilson. He described one boy who, during his first few months at preschool, always wanted to have a wall or a fence behind him to feel safe “He was mapping out the whole school, getting to know every kid and every teacher,” Wilson says. “He was always holding something too — a stuffy or a picture of his parents. He just needed to get oriented. Now he’s fine, he’s part of the group.”

“Shyness and clinginess are normal — and they have to do with temperament 100 percent,” says pediatrician Laurel Schultz. She says that child development experts now prefer the term “slow to warm” to “shy,” because it’s a more accurate description of what’s going on with the child. “These kids will get there in their own time,” she explains. “They are highly sensitive and easily overwhelmed. They need to be understood — but this doesn’t mean they should be catered to.”

If your child is slow to warm up, you can expect it to affect every transition. A new school, the first day at summer camp, a birthday party at a house you’ve never been to before – all will be hard for a child who’s slow to warm, so plan accordingly. If your child gets upset when you leave her at preschool, for example, build in enough time so you can stay for a few minutes. Encourage your child to take along a family picture, a stuffy, or some other object that makes her feel safe. Talk to your child ahead of time and agree on a goodbye ritual for drop-off time. You can say, for example: “I will come into school with you and I’ll read two books, and then you can walk me to the door.” Be consistent and stick to the plan so your child always knows what to expect.

“These children are scoping out the situation to ensure it’s safe,” explains Craig Bailey, former preschool teacher turned researcher with the Yale Center for Emotional Intelligence’s preschool program. “That’s why they cling to Mom and Dad — because Mom and Dad are safe.”

If your child’s slow to warm, he’ll benefit from a gradual approach to new environments. At a new school, for example, consider visiting the classroom before the first day, when none of the other children are there. Make sure your child has a little time with the teacher, so they can begin forming a relationship. Let your child explore the classroom and check out the toys. Find out what snacks will be served, and if it’s something your child has never eaten, see if he can try a sample during the visit. Encourage your child to take a favorite toy or other object from home on the first few days of school.

Eric Wilson advises parents to arrange play dates with other children at their preschool. “The more kids they know, the more comfortable they’ll feel. For most kids, it really doesn’t take long,” he says.

Fake it till you make it

If your child is slow to warm, each transition is likely to be wrenching for you, too, but Schultz advises parents to hide their concerns. “Convey to your child that he or she is going to be fine – and that you believe that, too,” she says. “This is really important: your confidence is the scaffolding your child needs to feel secure in the world. Plan for success and convey that to your child. Those are my favorite three words: plan for success.”

As for Elliott, despite his mother’s worries that he’d never leave home, he’s now an independent and successful college student. His mother’s main complaint? He rarely calls home.

Enjoying our preschool behavior series, Is it normal? Get the lowdown on other actions that confound parents of young children, including: biting and hitting; behavior changes at school versus home; hurting animals; learning manners and nice words; lying, hiding things and stealing; gun play; “magic years” behaviors, like dressing up, cross-dressing, and imaginary friends; and more!