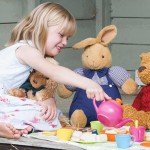 Advertisement
Parenting » Early learning, Emotional smarts » Is it normal that your preschooler has an imaginary friend?

Is it normal that your preschooler has an imaginary friend?

All children play make-believe, but some are more creative than others. If your little one has imaginary friends, here's what you should know.

The preschool teacher was new and she’d never seen anything like it before. One of her students, a 3-year-old boy, desperately wanted to be a dog. He rarely dropped his doggy persona. When she asked him a question, he replied with a bark. Concerned, she told his mother that she suspected he might have autism, and recommended he be evaluated for early intervention. The worried mother took him to see his pediatrician, Laurel Schultz.

There was nothing wrong with the boy, says Shultz. “Ages 2 to 6 are called ‘The Magic Years’ for a reason. It’s all about fantasy and imagination, and we should do everything we can to encourage it, because it’s such an important part of child development.”Princesses, super heroes animals, monsters — they’re all good. “Even if kids are dressing up as cops and robbers and using Legos to make guns — I’d much rather see that kind of creative play than to see kids sitting in front of the TV,” says Schultz.

Imaginary friends can be helpful in real life

When a child first starts talking (and “listening”) regularly to their imaginary pal, some parents worry. But if your preschooler has an imaginary friend or two, Schultz says just think of it as another expression of your young child’s rich imagination. “It might be a different story if the child were 8 years old and still talking to imaginary friends, but in preschool, I say the more the merrier!”

Parent educator Nancy Gnass says parents frequently voice their concern about imaginary friends. “Parents worry,” she says, “because it’s not what adults do. But adults also don’t have the same imagination children do.”

Gnass remembers panicking when she first heard about her daughter’s imaginary friend, Paco. “She was barely 2 and talking about her friend Paco all the time,” Gnass says. Gnass consulted the doctor, who lauded her daughter’s creation, calling it “totally great” and saying her daughter showed “signs of advanced cognitive thinking.”

Since then, Gnass has learned there are many upsides to imaginary friends. They help children build relationships, process information, and replicate an adult’s world. “If they are feeling powerless, they can use an imaginary friend to feel powerful.”

Henrike Moll, who studies cognitive development in young children at University of Southern California, says imaginary friends aren’t as common as we might think – and we should treasure them while they last. “Kids will grow out of their imaginary friends, just like they are going to grow out of [their belief in] the Easter Bunny or Santa Claus,” Moll says.

Embracing an imaginary pal doesn’t mean your child’s out of touch with reality, adds Moll. “By age 3 or 4, most little ones are pretty good at telling the world of reality apart from pretend.” For example, she says, “She can probably tell the difference between her posse of imaginary friends and her real ones.”

Whether or not your child has a regular imaginary pal, he most likely conjures up imaginary playmates and scenarios every day. This sort of imaginary play has many benefits for physical, social, language, and brain development. When your child picks up an imaginary ladybug, or leaps from couch to couch because the floor is hot lava — he’s building motor skills.

He’s also building crucial communication and language skills. “When you’re dealing with imaginary characters and imaginary things,” says Gnass, “while you’re staring at a blank open hand, your child is saying, ‘Look Mommy, I’m giving you chocolate cake, it has sprinkles all over the top.’ Because neither of you can actually see it, your child must use language to set up the scenario and describe what she imagined.”

Bottom line? Encourage your little one to get lost in a world of mud pies, fake friends, and hot lava floors. He’s only got a few years to revel in these magic years of make believe.

Enjoying our preschool behavior series, Is it normal? Get the lowdown on other actions that confound parents of young children, including: biting and hitting; behavior changes at school versus home; hurting animals; shyness, confidence, and trouble with transitions; lying, hiding things, and stealing; teaching little ones manners; gun play; “magic years” behaviors, like dressing up, cross-dressing; and more!